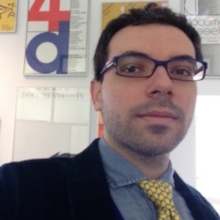 Diego Mantoan is Assistant Professor in contemporary art history at Ca' Foscari University of Venice, holding a PhD at Freie Universität Berlin, and is further among the founding members of the Venice Centre for Digital and Public Humanities. He was director assistant and jury secretary at the Venice Biennale, while he later established a career as art archive curator in Germany. He has worked for celebrity artist Douglas Gordon (Berlin) and Sigmar Polke Estate (Cologne), while he is still in charge of digital archive development at Julia Stoschek Collection (Düsseldorf and Berlin). He is a contributor for the program WikiRadio on the cultural state broadcast Rai Radio3 and for the Peggy Guggenheim Collection in Venice.
He is Advisory Editor of Vernon Press Academic (USA) and member of the editorial board of the Yearbook of Moving Image Studies (Germany). His book The Road To Parnassus: Artists Strategies in Contemporary Art (Vernon Press 2015) was long-listed for the Berger Prize 2016 by The British Art Journal in London. He recently published his first German book Autoritär, Elitär & Unzugänglich: Kunst Macht und Markt in der Gegenwart (Neofelis Verlag 2018) on contemporary art market and power relations, while he further established his international reputation with the edited volume Paolozzi and Wittgenstein: The Artist and the Philosopher with prestigious publisher Palgrave MacMillan.
He was among speakers at relevant international conferences, such as University of Bern, Bibliotheca Hertziana, University College London, Vrije Universiteit Amsterdam, Universidad Autonoma de Madrid and Sotheby’s Institute of Art. He is co-founder of the Sustainable Art Prize of Ca’ Foscari University of Venice at the Italian art fair ArtVerona and has started since a thorough research in the field of sustainable art practices. In the Academic Year 2019/20 he has been invited as Visiting Fellow at the Department of Technology, Culture and Society of New York University.