Ca’ Foscari archaeologist Paolo Biagi, of the Department of Asian and North African Studies, discovered obsidian mines on Mount Chikiani in Georgia. The discovery sheds new light on the entire mining activities of prehistoric Europe. In fact, obsidian mining pits have never before been found in Europe where, in the Carpathian Mountains for example, volcanic lithic material was collected from the surface in the form of "bombs" of different size and shape.

Even in the third and fourth millennium BC, obsidian was so important in the economy of the inhabitants of the Caucasus that the extraction of volcanic glass blocks was planned in a way of which we still know very little. Therefore, even during the metal ages, knapped stone was still playing a fundamental role in the production of everyday tools.

The Caucasians miners moved to Javakheti upland, in present-day Georgia, where Mt. Chikiani (or Koyun Dag) rises above 2400m , just northeast of Lake Paravani. It is a rounded volcanic dome, characterized by several obsidian flows that originated ca. 3 million years ago.

Along the northern slopes of the mountain, hundreds of shallow mining pits were discovered at around 2200 metres of altitude. Their openings are still clearly visible surrounded by obsidian waste flakes and blocks of black, grey, orange and red colour, resulting from mining.

During the survey carried out in July 2016 by Paolo Biagi, Professor Renato Nisbet and two students of Tbilisi State University, the openings of some 250 obsidian extraction pits were mapped along the northern slopes of the mountain.

Obsidian retrieved from the pits was later knapped in workshops that were recovered in a few cases very close to the aforementioned pits. So far, eight workshops have been found, though their number is undoubtedly higher. Obsidian chipped stone artefacts were transported from Chikani to surrounding prehistoric sites, distributed within hundreds of kilometres following trade routes and modalities so far almost unknown.

"We have merely scratched the surface of research that still has many questions left to answer - says Paolo Biagi - for example, we do not know anything about the routes followed by prehistoric miners to reach the Javakheti upland, which was partially forested until the beginning of Bronze Age and at least up to 2000 metres of altitude, and how they were organized. We suppose that the extraction activities were conducted seasonally, due to the very low winter temperatures that lead to the complete glaciation of the Paravani basin, along with the snow cover that affects the region for six months a year. We are undoubtedly facing unknown aspects of a complex Chalcolithic/Bronze Age civilization, known as the Kura-Araxes culture".

Surprising the archaeologists are hundreds of burial mounds, or kurgans, whose distribution follows precise orientations. Megalithic complexes include huge alignments of boulders that are over 100 metres long, write Paolo Biagi and Renato Nisbet, and a bethel (large sacred stone) perhaps to indicate the importance of the locality.

The research in the Javakheti upland has been carried out thanks to the financial support of the Archaeological Research Funds of Ca’ Foscari University of Venice and the EURAL-Gnutti Spa. The research is conducted in cooperation with Tbilisi State University whose Archaeology Institute is directed by Professor Vakhtang Licheli, and the CNRS of Orléans University for the characterization of the obsidian samples, by Professor Bernard Gratuze. 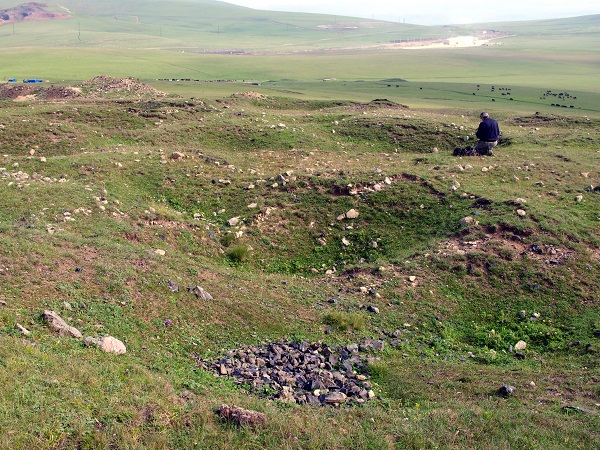