The development of writing marks the beginning of History as we know it, and it is just as essential for our understanding of past civilisations as of the world we live in today. For example, 2500 years ago, Greeks started writing on stone, ceramics and metal, in order to register all sorts of transactions, laws, calendars and oracles. Today, these archaeological findings reveal a lot of information on the Mediterranean area.

Unfortunately, this tale is incomplete. As centuries went by, many ancient inscriptions were damaged and became partially or completely illegible. In some cases, they were removed from their original location, and they can be difficult to date. Modern dating techniques such as Carbon-14 dating, in fact, cannot be used on material like this, so inscriptions can be particularly difficult to interpret.

Ithaca — whose name is inspired by the Greek island in Homer’s Odyssey, is the first deep neural network that can aid historians in not only restoring the missing text of damaged inscriptions, but also identifying their original location, and establishing the date they were written. The system is trained on the largest digital dataset of Greek inscriptions from the Packard Humanities Institute. The paper has been published in the scientific journal, Nature.

The model was designed with collaboration in mind and is best used in conjunction with researchers where historical knowledge combines with Ithaca’s assistive input. While Ithaca alone achieves 62% accuracy when restoring damaged texts, when historians use it their performance leaps from 25% to 72%.

Ithaca can also attribute inscriptions to their original location with 71% accuracy and date them with less than 30 years from ground truth ranges.

Historians have already used the model to shed light on current disputes in Greek history, including the dating of a series of important Athenian decrees thought to have been written before 446/445 BCE. New evidence recently presented by historians suggests the 420s BCE as a more appropriate time period. Remarkably, Ithaca’s average predicted date for the decrees is 421 BCE, aligning with the new evidence and demonstrating how machine learning might contribute to historical debates.

“Although it might seem like a small difference, this date shift has significant implications for our understanding of the political history of Classical Athens,” said Thea Sommerschield, Marie Curie Fellow at Ca' Foscari University of Venice and fellow at Harvard University’s CHS. “We hope that models like Ithaca can unlock the cooperative potential between AI and the humanities, transformationally impacting the way we study and write about some of the most significant periods in human history.”

“We believe machine learning could support historians to expand and deepen our understanding of ancient history, just as microscopes and telescopes have extended the realm of science,” said Yannis Assael, Staff Research Scientist at DeepMind. “Ancient Greece plays an instrumental role in our understanding of the Mediterranean world, but it’s still only one part of a vast global picture of civilisations that could be explored.”

The team is currently working on versions of Ithaca trained on other ancient languages. Historians can already use their datasets in the current architecture to study other ancient writing systems, from Akkadian to Demotic and Hebrew to Mayan.

To make the research widely available to researchers, educators, museum staff and others, DeepMind has partnered with Google Cloud and Google Arts & Culture to launch a free interactive version of Ithaca. To aid further research, we have also open sourced the code, the pretrained model, and an interactive Collaboratory notebook.

Thea Sommerschield is a Marie Skłodowska-Curie fellow at Ca’ Foscari, and Ithaca is the first outcome of her project PythiaPlus, which received funding from the European Union’s Horizon 2020 research and innovation programme. 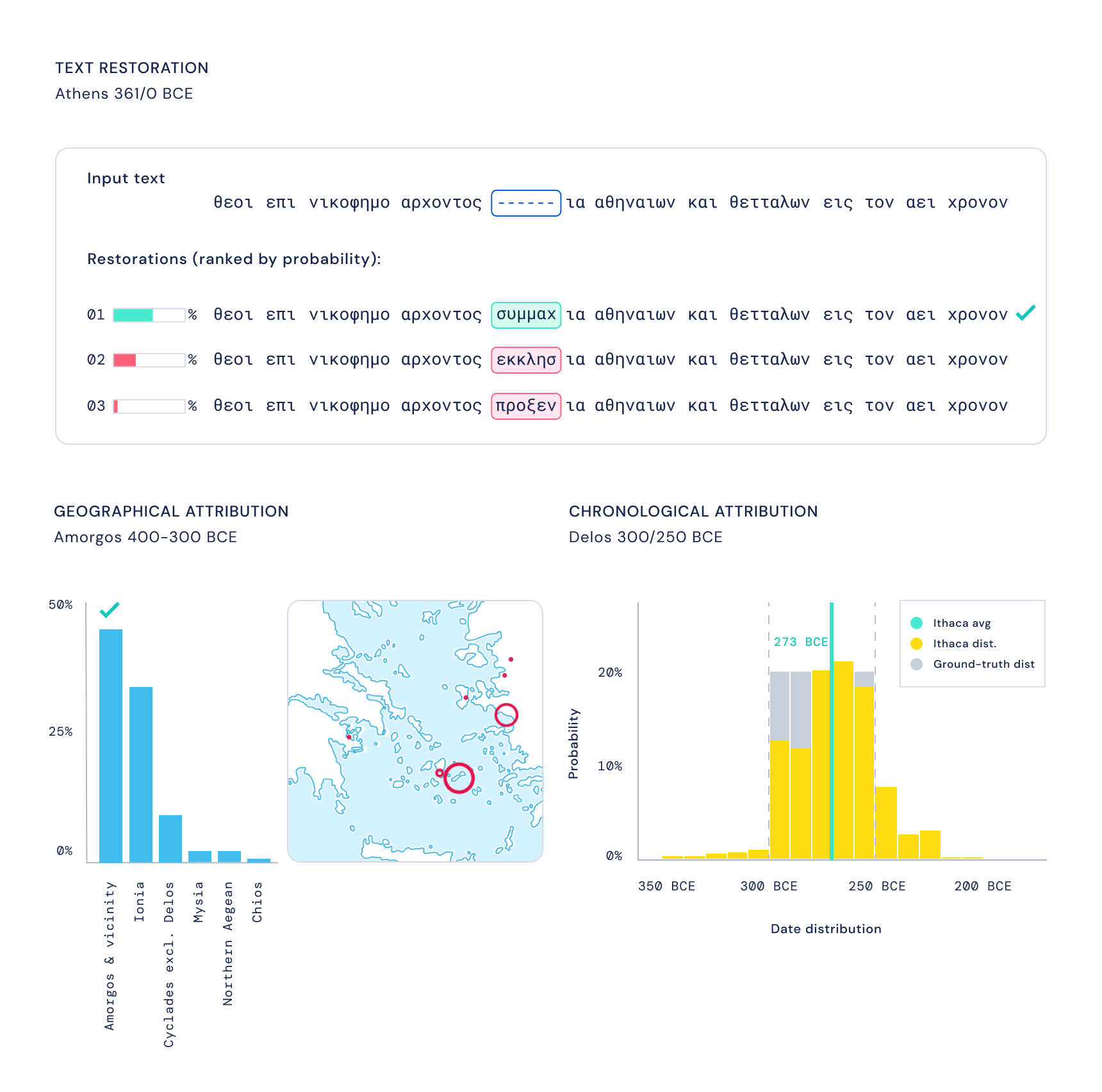 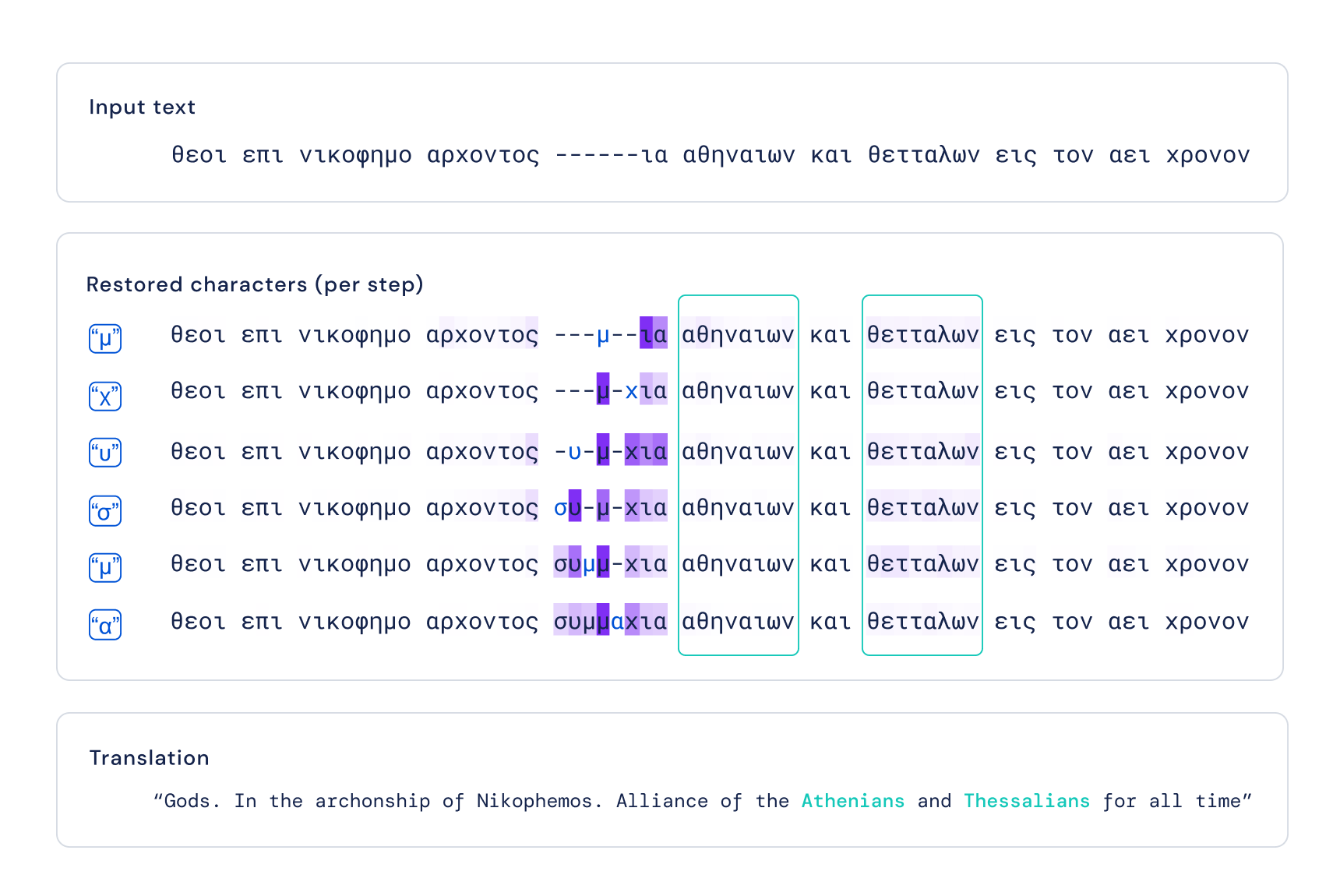 Tiziana Lippiello, Rector of Ca' Foscari University of Venice, said: "This is a fantastic result for our Department of Humanities. The innovative approach of this project reflects the attitude that Ca' Foscari adopts in its scientific research, which involves being open to international partnerships and to interdisciplinarity. I wish to congratulate the team of researchers on their contribution. By combining the humanities with AI and promoting the dissemination of knowledge and high-profile collaboration, Ca' Foscari continues to support this new frontier in research."

Lorenzo Calvelli, Professor of Roman History, Department of Humanities at Ca’ Foscari University of Venice, said: “Thanks to Ithaca, the written cultures of the ancient world can finally be approached with innovative research technologies. Applying Artificial Intelligence to the study of hundreds of thousands of inscriptions will enable us to compare, study and restore texts well beyond the possibilities of any human mind.”