The epic search for the oldest ice in Antarctica has started

The Beyond EPICA Oldest Ice Core project began its operations on June 1st, 2019. The aim of this European initiative is to drill and recover ice samples from up to 1.5 Million years ago in Antarctica. The previous EPICA project uncovered ice from 800,000 years ago but the new research expedition hopes to go beyond.
The ice core samples will give us information on the greenhouse gases that were present during the Mid-Pleistocene Transition (MPT), which occurred between 900,000 and 1.2 million years ago. During this period of time, the climate cycle changed and ice ages went from occurring 41.000 apart to taking place every 100.000 years. Why this alteration happened is what scientists are trying to find out. 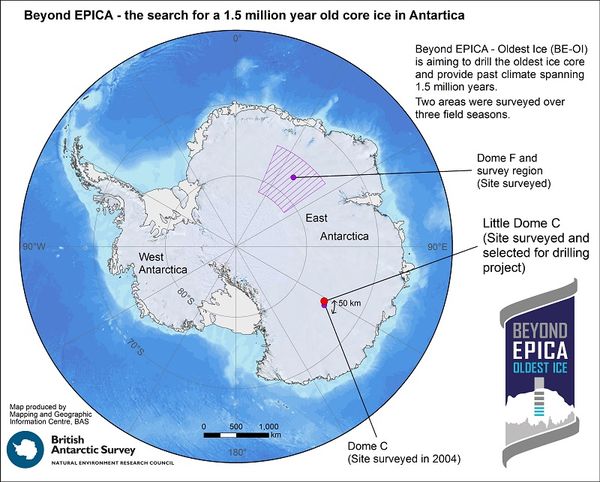 Experts from 10 European countries and 16 different Research Institutions have joined forces under the guidance of Professor Carlo Barbante and his team of scientists from the CNR and Ca' Foscari University of Venice (Italy). The whole operation was funded by the European Horizon 2020-research programme.

The drilling site, at Little Dome C, was previously identified by an EU funded geophysical survey project, led by Olaf Eisen from the Alfred Wegener Institute in Germany. Little Dome C is located only 40km from Concordia Station, the Italian-French base on the high Antarctic Plateau. The Station is run by IPEV and the PNRA, the French and Italian polar agencies and it is situated at over 1000 km from the coast, at an altitude of 3233 mt above sea level.

Even on a balmy summer day, the temperatures here reach a high of -25°C, whilst in mid-winter they drop to under -80°C. It may seem absurd when you’re sitting on 3 km of water, but Dome C is as dry as the Sahara Desert, so snow accumulates slowly, gradually trapping precious air bubbles in the ice, which the researchers hope to analyse to find the atmospheric composition of the distant past. By careful analyzing the isotopic ratios in this ancient ice, the samples will become a sort of time thermometer.

“During the next two Antarctic campaigns, in 2019-20 and 2020-21"- explains Barbara Stenni, Professor at Ca’ Foscari University of Venice - "we will set up the drilling camp at Little Dome C, while the actual drilling operations have been scheduled for 2021-22. The end of the operations, if everything goes according to plan, will probably be in February 2024, when we will reach a depth of 2730 mt. “

“Until we obtain a direct measurement of the greenhouse gases in the last 1.5 milion years” - added Professor Carlo Barbante, coordinator of the initiative - we won’t be able to fully comprehend our climate system and what brought about the change in the climate cycle of this enigmatic period called the Mid-Pleistocene Transition”

For more information on the project, visit https://www.beyondepica.eu

Dancing Museums: a new way to enjoy art through dance

How I make music out of gondolas