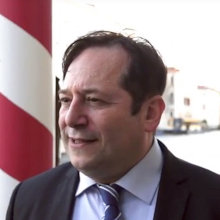 Prof. Fabrizio Marrella is the Vice Rector for International Relations and International Cooperation of the University of Venice "Cà Foscari".

He is Univ. Full Professor (Chair, with tenure) of International Law and European Union Law (12/E1), according to the Italian scientific sectors specialization title.

Attorney at Law, he is a Member of the Italian Bar, admitted to the Supreme Court and Highest Jurisdictions (Avvocato Cassazionista) including the European Court of Justice and other international tribunals. He has been junior associate and then Special Counsel of Studio Bernini in Bologna, the Law firm headed by Prof. Giorgio Bernini, the Honorary President of the International Council for Commercial Arbitration (ICCA) where he has practiced International Law, Trade & Business Law, International Commercial and Investment Arbitration, European Union Law, Antitrust and Private International Law.

At LUISS University of Rome, he taught International Law in the LUISS Law Degree Programme at the Department of Law (2017-2019). He previously taught International and European Environmental Law (2014-2017). He was in the Faculty of its LL.M in Law and Governance of the European Union, jointly organised by LUISS and the Sapienza University of Rome. There, he has taught EU Energy and Environmental Law .

He joined "Cà Foscari" University of Venice in 1999 and then he became member of its permanent Faculty. In 2007 and 2008, he was vice-Director of the Harvard University-Venice program where he presently continues to teach International Business Law.

Prof. Marrella is a Member of the ICC CLP (Commercial Law and Practice) Commission. He has been a Member of the Corporate Responsibility and Anti-Corruption Commission (2012-2016) and of the International Arbitration and ADR Committee of ICC Italy.

From 1996 to 1998 he was a full time Lecturer at the Institut de Droit Comparé de Paris (Université Paris II Panthéon Assas) and then Chargé de cours en Droit du commerce International at lHEAL (Institut des Hautes Etudes sur l'Amérique Latine) at the Université Paris III, La Sorbonne Nouvelle. Since 2011, he has taught WTO Law at the Master’s programme in Global Regulation of Markets offered by the Law Department of the Sapienza University of Rome.

In 2012 he was Rapporteur at the XVII National Symposium of the Italian Society of International Law (ISIL/SIDI), held in Genoa on "Unione europea ed investimenti diretti esteri" (EU Law and Foreign Direct investments).

He is General editor of the EIUC studies on Human rights and Democratisation edited by Cambridge University Press and has served in the scientific or advisory board of specialised journals such as the Journal of International Trade Law and Policy (Emerald, London, U.K.); Transnational Dispute Management (TDM). He currently serves on the board of Rivista di diritto internazionale privato e processuale (CEDAM-Wolter Kluwers); Contratto e impresa (CEDAM-Wolter Kluwers); della Rivista dell'arbitrato (Giuffré, Milan) as well as Diritto del commercio internazionale/The Law of International Trade (Giuffré, Milan). He is also a Member of the Advisory Board of the University of Bologna Law Review and a Member of the Scientific Committee of the European Journal of Human Rights/Journal Européen des droits de l'homme ; L’Europe des Droits & Libertés/Europe of Rights & Liberties (Université de Strasbourg/Fondation Marangopoulos); the Revista Brasileira de Arbitragem (Sao Paulo, Brasile) ; the European Yearbook on Human Rights (Vienna, Graz, Berlin); the Vienna Journal on International Constitutional Law (Vienna, Austria).  He is the Director of the International Law section of the Yearbook of Italian Law (Il libro dell'anno del diritto)  edited by the Italian Institute for the Encyclopedia of Law "Treccani" in Rome.

Amongst his representative publications there are:

Last update: 22/11/2022
The information above have been uploaded on Ca' Foscari website direclty by the user this webpage refers to. The correctness and truthfulness of the published information are responsibilities of the relevant user.
If you close the banner, only essential cookies will be automatically activated
Cookie Cookie Policy Information on cookies