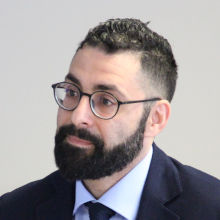 Oct. 2015 - Feb. 2016: Visiting Professor at the Pontifical Oriental Institute  (PIO) – Rome [Neo-Calcedonism and Monophysitism during the VI and VII cen.].

Oct. 2011 - June 2015: Teaching Arabic language at the Arabic school of the Pontifical Maronite College and the Maronite Community of Rome.

* Member of Commission of Doctorate Dissertations:

Third moderator, Candidate: Sheeba Sebastian SST, Dissertation’s title: “The Mystery of the Triple Gradated Church. A Theological Analysis of the Kṯāḇā d-Massaqāṯā (Book of Steps) with Particular Reference to the Writings of Aphrahat and John the Solitary” , Pontifical Oriental Institute-Rome, 27/01/2017.

* Member in international editorial board:

* Member in Associations and Groups of Research:

Member of SYRIACA, Association of Syriacists in Italy.

Paper, “Can the Qur’ān be read in the Light of Christ? Reflections on some Melkite authors and their use of the Holy Book of Islam”, Panel, Orthodoxy and the Challenge of Islam

Paper, “Christology and Monasticism. The case of Philoxenus of Mabbug”.

Conference, Christian Arabs. Heritage and actuality of their contribution to the history of civility (in Italian), Officina di Studi Medievali, Palermo, Ialy.

Paper, “Elias of Nisibis and his use of the doctrine on the divine attributes” (in Italian), Panel, The cultural heritage of Christian Arabs.

Paper, “Arab Christian Heritage and the Dialogue with Islam: the Contribution of Some Classical Texts of Melkite Authors”, Panel, “Eastern Christianity and Interreligious Dialogue: the Road Not taken?”.

Paper, “Dialogue and Orthodox Theology: The Importance of Inter-Christian and Inter-religious Dialogue According to Ignatius IV” .

Paper, “God my God, why have you forsaken me? Reflection on the suffering of man through personal experiences” (In Italian).

Paper, “The Synod of Mar Gewargis I in 676 and his Christological letter: an answer to the controversy of Martyrius?” (In Italian).

Lecture,“Despite fundamentalism: The relations between Christians and Muslims in the eyes of political Islam and jihadism” (In Italian).

Paper, “The Melkite Orthodoxy: The Six Ecumenical Councils according to Euthychius of Alexandria’s Annales and Agapius of Mabbug’s Universal History”

Paper, “Religion and state in the current crisis of the Middle East: Some proposals from Lebanon” (In Italian), Panel, “The Right to Religious Freedom between the Two Mediterranean Shores”.

Paper, “The Jacobite Church between imperial politics and doctrinal preservation: The formation of a ‘national’ identity” (In Italian), Panel, “Constructing Identities in Ancient Oriental Christianity”.

Lecture, “Christians in Muslim land and Muslims in Christian land according to the definitions and opinions of radical Islam” (In Italian).

Seminar, On the “Eucharist” organized by the Institute of ecumenical and patristic theology “San Nicola” of the Theological Faculty of Apulia, Luppiano, Italy.

Lecture, “The Eucharistic celebration, from the biblical narrations to the tradition of the Fathers: An orthodox approach” (In Italian).

Lecture, “Islam and we? Getting to know each other and meeting each other” (In Italian).

Paper, “The influence between Islamic Kalām and Christian Theology: the case of the doctrine on the divine attributes” (In Arabic).

Paper, “The “two-qnomē” Christology prior to 612 AD and its relation to the Greek-speaking ‘Nestorians’: An analysis of Ḥabīb’s chapters and the Nestorian doctrine in Leontius of Byzantium and Leontius of Jerusalem”.

Paper, “The Trinitarian doctrine of Ibn aṭ-Ṭayyib: An interpretation of Babai the Great’s metaphysical system in the world of Islam”.

Christological debate between Chalcedonian and non-Chalcedonian Churches during the 10th and 11th century.

Arab Christian Christology and its relationship to the Ecumenical Movement today.

Paper, “The Christian-Muslim Dialogue in the first Arabic apologetic works of Palestinian Christians” (In Arabic).

Lecture, “Pontius Pilate in the New Testament and the Apocryphal tradition” (In Greek).

Lecture, “Christians in Holy Land throw the eyes of a witness” (In Italian with Polish translation),

Lecture, “The Hope and the Heartbreak: The Challenges of Modern Christians in the Land Where Jesus Preached”

Paper, “Muslim Fundamentalism and its relations to Christians: The views of the Muslim Brotherhood, al-Qaeda and Isis” (In Greek).

Paper, “Christianity in the Holy Land: Past, Present and Future” .

Lecture, “Christological Debate between Chalcedonian and non-Chalcedonian Churches in the light of Arab Christian Theology and its Contribution to Ecumenical Movement” (In Italian).

Lecture, “The Church of Jerusalem and the first three ecumenical councils” (In Italian).

Lecture, “Arab-Christian literature and the role of the Christians in the making of the Arabic culture” (In Arabic).

The Center of Carmel, Haifa, Israel.

Lecture, “Dialogue between Muslims and Christians - the Organisation of Adyan in Lebanon” (In Greek).

Master students Lecture, “Methodology and Writing of a Thesis” (In Greek).

Lecture, “The Christians in the Middle East” (In Italian).

Lecture, “The progress of the Christological doctrine after the Council of Chalcedon” (In Italian).

Lecture, “Christological doctrine in the synods of the Church of the East” (In Italian)

Masters Students Lecture, “Christians in the Middle East” (In Greek).

Lecture, “Gospel of the Wife of Jesus” (In Greek).

Masters Students Lecture, “The critical edition of Arabic –Christian works and manuscripts and the first Arabic apology of MS Arabic Sinai 154” (In Greek).

Lecture, “Dialogue between Muslims and Christians” (In Greek).

Lecture in Course, “The religions of the East” by Prof. Panagiotis Pakhis and Prof. Aggeliki Ziaka,  Aristotle University, Faculty of Theology, Thessaloniki, Greece.

Lecture, “The Islamic Religion in the eyes of Arab Christians” (In Greek).

Lecture, “The symbolism of the groom in the Christian tradition” (In Greek).

Lecture, “Christians in Middle East - Writing a Theology in Arabic”