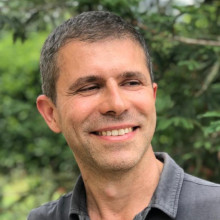 I am a political and religious historian of early modern Italy. My interests include Public History, Digital Humanities, and archival studies. I was awarderd fellowships at many prestigious institutions (Villa I Tatti-the Harvard University Center for Italian Renaissance Studies, the Institut d’Histoire de la Réformation of Geneva, the Newberry Library of Chicago, the USTC Project at the University of St Andrews, the Institute for Advanced Studies in the Humanities at the University of Edinburgh, the Schoenberg Institute for Manuscript Studies at the University of Pennsylvania, and the Italian Academy for Advanced Studies at Columbia University). From 2006 to 2010 I was a Fondazione Monte dei Paschi di Siena Fellow at the Medici Archive Project and from 2011 to 2015 I was a Research Fellow in the ERC project ‘Italian Voices’ at the University of Leeds. In 2019 I joined Ca' Foscari where I am a team member of the Venice Centre for Digital and Public Humanities.

I have published widely on political and religious dissent in Renaissance Florence and Italy, with a specific focus on Girolamo Savonarola and sixteenth-century Savonarolism, and political opposition to the Medici. My books include 'Vulnera diligentis', 'Savonarola in Francia', 'L'eremita e il sinodo', 'Savonarola and Savonarolism', and 'L'assassino del duca', while my edited volumes are 'Oral Culture in Early Modern Italy', 'Voices and Texts in Early Modern Italian Society', and 'Storie nascoste'. My monograph 'The Duke’s Assassin. Exile and Death of Lorenzino de’ Medici' (Yale University Press, 2015) won the Helen and Howard R. Marraro Prize awarded by the American Historical Association. My article ‘Voices under Trial. Inquisition, Abjuration, and Preachers' Orality in Sixteenth-Century Italy’ (Renaissance Studies, 2017) was awarded a honorable mention by the Society for Renaissance Studies. I am currently working with the Medici Archive Project on a newly discovered corpus of letters written by the prince and cardinal Leopoldo de’ Medici to his agent in Rome Ottavio Falconieri, producing both a digital online database and a scholarly monograph.

I believe in the importance of making history with and for the public and I am keen to take my research beyond the academia and reach different publics. I have written several articles in magazines for general readers both in Italian and in English, as well as blog posts and essays and entries for exhibition catalogues. I featured as a leading expert in podcasts and documentaries that were broadcast on TV and radio, both in Italy and the UK. I contributed to the organization of some exhibitions, I have delivered public lectures for non-academic paying audiences, and I have organized many public lectures for the general audience. I am a member of AIPH (Associazione Italiana di Public History) and IFPH-FIHP (International Federation for Public History-Fédération International pour l'Histoire Publique).

I firmly believe that the new technologies are playing a vital role in helping us to preserve and study our cultural and historical heritage, gain a better understanding of data, and make our research more accessible to a broader public. Before joining the Venice Centre for Digital and Public Humanities my experience in Digital Humanities came from the work I have done at the Universal Short Title Catalogue Project at the University of St Andrews and especially at the Medici Archive Project (MAP). This institution is devoted to the digitization of archival documents and the building of a digital online interactive database of early modern documents from the Medici Archives in Florence. I am currently in charge of the Falconieri project, carried out under the aegis of MAP (http://www.medici.org/the-falconieri-project/), which revolves around the creation of a digital online database of a corpus of seventeenth-century letters. I am a member of AIUCD (Associazione per l'Informatica Umanistica e la Cultura Digitale).

1997  Laurea in History and Political Science, Sapienza University of Rome.

2016  Visiting Research Fellowship, Institute for Advanced Studies in the Humanities, University of Edinburgh.

2010  Lila Acheson Wallace Grant (Villa I Tatti-The Harvard University Center for Italian Renaissance Studies), for the publication of the book Savonarola and Savonarolism.