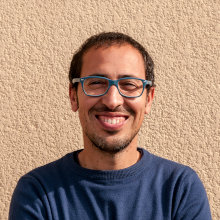 Federico Bernardini (Trieste, 1979) is an archaeologist with extensive experience in the application of scientific methods to archaeology to study and characterise ancient materials and investigate past landscapes.

He is type A researcher at the Venice Centre for Digital and Public Humanities (VeDPH) at the Dipartimento di Studi Umanistici (DSU) and is visiting scientist at the Multidisciplinary Laboratory of the Abdus Salam International Centre for Theoretical Physics (ICTP, UNESCO) in Trieste, where he has been coordinating the ICTP-Elettra laboratory for cultural heritage and archaeology for about ten years. Since 2018 is cultore della materia for the sector L-ANT/01 at the Department of Humanistic Studies of Trieste University. He is fellow of the Lund Institute of Advanced Neutron and X-ray Science (LINXS), Sweden, and member of the geoarchaeological working group. He is also member of the Scientific Committee of the consortium Advanced Technology Lab for Cultural Heritage (Atlach) of Friuli Venezia Giulia region (Italy) and of the teaching staff of the Scuola Interateneo di Specializzazione in Beni Archeologici (SISBA).

He studied Ancient History with Prehistoric specialization at Trieste University and has been awarded a doctoral degree by the same institution for his Archaeometric study of polished stone axes from Caput Adriae. He has been researcher at the Trieste and Udine Universities and at Centro Fermi, Museo Storico e della Fisica e Centro Studi e Ricerche Enrico Fermi in Rome in the framework of the projects Microtomography for archaeology and palaeontology and SAPIENS - Science for archaeology and palaeoanthropology: to interpret our history. Between 2016 and 2018 he coordinated the Agreement for the development of advanced scientific techniques for the knowledge, protection and valorisation of the archaeological sites and landscape of Friuli Venezia Giulia Region including ICTP, Soprintendenza Archeologia FVG and the University of Trieste.

He is author of about 50 publications in peer-reviewed international journals, including Nature and PNAS, and as many in Italian volumes an journals (https://www.researchgate.net/profile/Federico_Bernardini2/research).

• 2012-present - Department of Mathematics and Geosciences of Trieste University, Institute of Archaeology ZRC SAZU. Study of early Roman military fortifications of the Trieste area and related landscape through remote sensing, geophysical investigations, surveys and archaeological excavations in Italy and Slovenia.

• 2010-2014 – ICTP, Elettra Sincrotrone Trieste. Development of state of art non-destructive instrumentation to study archaeological and palaeontological remains in the framework of the EXACT project (Elemental X-ray Analysis and Computed Tomography).

• 2010-present - Italian and foreign institutes. Interdisciplinary study and characterization of archaeological artefacts: 1. study of raw materials of the blue stones of Stonehenge through portable X-ray fluorescence (Open University, UK, from 01-02-2003 to 31-08-2003); 2. study of the putative Neanderthal flute from Divje Babe cave (Slovenia) through microCT (National Museum of Slovenia, Institute of Archaeology ZRC SAZU, from 01-01-2010 to 31-12-2012); 3. study of bee products exploitation in Neolithic groups of Europe, Near East and north Africa through lipid analysis in prehistoric pottery (Bristol University, from 01-01-2015 to 31-12-2015); 4. study of organic and inorganic artefacts from Palù di Livenza through microCT and other methods (Soprintendenza Friuli Venezia Giulia, from 01-09-2016 to present); study of ancient projectile impact marks (MUSE, from 01-09-2016 to 2018); study of dog domestication also through microCT study of dental tissues proportions in dog and wolf carnassial teeth (Siena University, from 01-01-2014 to present).

• ICTP (UNESCO) project responsible: Bears & Humans Project - A new Tale of Bears and Humans in Trentino throughout Prehistory, funded by Fondazione Caritro with about 50kilo euro and coordinated by MUSE di Trento. from 2019 to 2021

• Responsible of the Erusmus+ student David Prokop (Brno University of Technology) during his traineeship in the Multidisciplinary Lab of ICTP. February-August 2018

• Adjunct Professor of Archaeometry (L-ANT/01) at the Department of Humanistic Studies of Trieste University for the School of Specialization in Archaeological Heritage (SISBA). from 26 July 2013 to 31 October 2013

He is scientific director of excavations at Grociana piccola and San Rocco, two Republican Roman military fortifications close to Trieste (north-eastern Italy) and took part to many archaoelogical excavations and surveys in italy and abroad.

• Co-organiser of the scientific session 28 Geoarchaeology of the 90th Congress of the Italian Geological Society, Trieste 16 - 18 September 2020 (postponed to 2021).