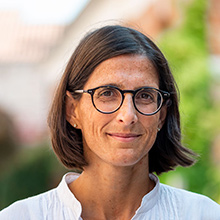 Her research focuses on the global impacts of climate change on the economy and households. She combines different disciplines, specifically environmental economics, climate science, microeconomics. She relies on integrated assessment models to study how human and natural systems could interact under future changing climate and economy. She applies econometric and statistical methods to historical data to understand how human and natural systems have coped with observed changes in the past. Secondary research interests include technological change, the role of institutions in the transition toward sustainable development. She has also worked at the development of the adaptation module of the WITCH model, one of the first Integrated Assessment Models combining mitigation and adaptation policies to climate change.

At the moment her work focuses on households and firms' adaptation to climate change in the context of the energy transition, with a focus on energy habits as a mean to respond to weather shocks and adjust to climate conditions.

She has collaborated with several research organizations. Between 2004 and 2005 she was research assistant at the climate change unit at CEPS in Brussels. Between 2005 and 2006 she was visiting researcher at Joint Programme on the Policy and the Science of Climate Change (JP) at the Massachusetts Institute of Technology (MIT) in Cambridge. In 2012 she visited the ZEW in Mannheim, where she worked on the joint FEEM-ZEW project, “Diffusion of Climate-Friendly Technologies – The Role of Intellectual Property Rights, Human Capital and Environmental Policy – Climtech”.

In 2012 she was awarded a Marie Skłodowska-Curie International Outgoing Fellowship and she was a research scholar at the Department of Earth and Environment, Boston University, US. She worked with Prof. Ian Sue Wing at the development of novel economic methods and models to evaluate the economic consequences of climate change impacts and adaptation.

She has been involved in several international projects. In particular, she has been the leader of the PECE project funded by United Nations University (UNU-WIDER) and the FEEM leader of the PATHWAYS project (EC, FP7). She has also contributed to the first Country Report “Pathways to Deep Decarbonization in Italy“, which analyzed different decarbonization scenarios in 2015 and she has been a member of the Steering Committee of the EMF28 study on scenarios for transforming the European Energy System.

September 2005 – June 2006, Visiting student and researcher, Massachusetts Institute of Technology (MIT), the Joint Programme on the Policy and the Science of Climate Change (JP) and the Centre for Environment and Energy Economics (CCEPR) Cambridge (USA)

Massachusetts Institute of Technology (MIT), the Joint Program on the Policy and the Science of Climate Change (JP) and the Centre for Environment and Energy Economics (CCEPR) , Cambridge (USA) International Exchange Fellowship 2005