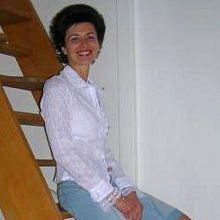 Since 2017, Marina Buzzoni has been Full Professor of Germanic Philology (ssd. L-FIL-LET/15) at Ca’ Foscari University of Venice [CFU], Department of Linguistics and Comparative Cultural Studies.

Former student at the “Ghislieri” College in Pavia – where students are awarded a place on the basis of merit –, Marina Buzzoni holds a degree summa cum laude and "dignità di stampa” (“publication recommended”) in Foreign Languages and Literatures (1994) and a Ph.D. in Germanic and Norse Philology (1999) with a special focus on scholarly editing (see the monograph "Le sezioni poetiche della Cronaca anglosassone. Edizione e studio tipologico" 2001). She spent her training abroad at the University of Oxford (St Hugh's College), Johannes Gutenberg-Universität Mainz (D), and Universiteit Leiden (NL), where she specialised in (digital) scholarly editing and studied web technologies. Before becoming a Full Professor, she worked as University Researcher (1999-2002) and then as Associate Professor (2002-2017) at CFU.

In her academic career, she has authored six monographic volumes, as well as various scholarly articles and book-chapters (complete publications list: https://www.unive.it/data/persone/5592048/pubb_anno). A co-edited volume on stemmatology funded by the Swiss National Science Foundation and titled "Handbook of Stemmatology: History, Methodology, Digital Approaches'' has recently been published by De Gruyter (2020).

She is also involved in various digital projects: she is a member of the Editorial Board of the Parvum Lexicon Stemmatologicum (2015) a project supported by COST Action IS1005 – Medieval Europe, (https://wiki.helsinki.fi/display/stemmatology). She is co-editor of the Digital Ramusio Project (http://virgo.unive.it/ecf-workflow/books/Ramusio/main/index.html), which has received an award from Ca' Foscari University of Venice due to its high impact in the research community, and is now being developed into a comprehensive digital edition of the Devisement dou Monde (DEDM), financially sustained - among other institutions - by the Confucius Institute at CFU. She has extensively worked on the ALIM [Archive of the Italian Latinity of the Middle Ages] project (http://alim.unisi.it/), and is now preparing a digital scholarly edition of the Lombards Laws/Leges Langobardorum in collaboration with Roberto Rosselli Del Turco (http://en.alim.unisi.it/editto-di-rotari/). The ALIM project was launched in the 1990s under the auspices of various Italian Cultural Institutions like CUN (National Research Council) and UAN (Unione Accademica Nazionale); the project has long been supported by PRIN funds, renewed almost continuously from 1996 to 2016. Over the years, the digital library has grown steadily, has joined forces with similar archives like the huge Corpus Corporum project (http://www.mlat.uzh.ch/MLS/xanfang.php?corpus=21&lang=0), and sought integration into CLARIN ERIC infrastructure (Boschetti, Buzzoni et al. 2020).

As for the organisation, direction and coordination of national and international research groups or the participation in the aforementioned groups, the most important ones are listed below, with the specification of the role played by Marina Buzzoni.

2016 to the present: Stemmatology in the digital age. Role: member of the Editorial Board.

2010-2012 and 2017 to the present, Studia Stemmatologica I e II, sustained by the Finnish Cultural Foundation (http://cosco.hiit.fi/stemmatologica/)

At Ca’ Foscari University of Venice, she is co-coordinator of the PhD Programme in “Lingue, culture e società moderne, e Scienze del Linguaggio” (Chair of the curriculum in “Language Sciences”, 2017→). Marina Buzzoni has been a member of the aforementioned PhD Programme since 2006. She is a former member of the Didactic Board of the Specialization Course in Digital Humanities (2015-2019), now turned into an MA course in Digital Humanities (2020→). Over the past years Marina Buzzoni has taught several Digital Humanities, Germanic Philology and Historical Linguistics modules at BA, MA, PhD levels both in Italian and English, among which “Elements of digital editing”, “Digital Philology and Text Encoding”, “Digital Tools and Resources for Textual Data”, “Computer-Assisted Stemmatology”, “Artificial intelligence and automatic handwriting recognition”.

Marina Buzzoni is current President of the Italian Association of DH [AIUCD=Associazione per l’Informatica Umanistica e la Cultura Digitale]. As for European Research Infrastructures, she is a member of the CLARIN ERIC Scientific Advisory Board (2019→). She is also a former member of the Executive Board of the Italian Association of Germanic Philology [AIFG] (2014-2020).

She is also a member of, or affiliated to, a number of international centers in the DH domain, including VeDPH, Lund Humanities Lab, Besançon Research Centre “Lucien Tesnière”. She attended, as invited or accepted speaker, around 150 national and international research conferences both in the DH field (e.g. TEI, CLARIN, AIUCD) and in the philological domain (e.g. ESTS, AIFG, Stemmatological Workshops all around Europe). She organized various international hands-on workshops and theoretical conferences, both focused on the projects carried on, and of more general interest for philological studies.

Among her major University Service Appointments can be listed:

- former member of the Quality Assurance Group of the MA Programme in Language Sciences (2016-2019);

Minor University Service Appointments include the coordination and participation in BA and MA didactic boards (“Collegi didattici”), and the coordination of the “Commissione didattica paritetica” of the Faculty of Foreign Languages and Literatures (2005-2009).