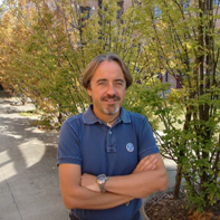 In the period 1997-2005, Maurizio Selva was Director of the "Green Chemistry" Laboratory of the Interuniversity Consortium "Chemistry for the Environment" (http://venus.unive.it/inca/), at the Scientific and Technological Park "VEGA" in Marghera.

Major research interests of Professor Selva are in the field of synthetic organic chemistry, more specifically, in the development of eco-friendly methodologies. His research lines are: 1. Synthetic and mechanistic investigations of reactions promoted by non-toxic compounds belonging to the class of dialkyl carbonates (DAlCs). In this field, Prof. Selva has a solid experience based on nearly 15 years of research: a number of processes of alkylation and carboxyalkyaltion of C-, O-, N-, and S-nucleophiles have been studied, and innovative reaction techniques have been set up under both continuous-flow and batch conditions. With respect to conventional reagents (i.e. alkyl halides, dialkyl sulfates, phosgene and its derivatives), DAlCs allow both environmental and safety benefits (non-toxicity, no additional solvents, catalytic processes); and, importantly from the synthetic standpoint, they also allow an unprecedented selectivity in the formation of mono-C- and mono-N-alkyl derivatives of CH2-active compounds and amines, respectively. These results have stimulated mechanistic investigations as well as applicative interests, that have been registered as patents for the synthesis of products for the pharmaceutical and dye industries, including arylpropionic acid derivatives and mono-N-alkylamines. Other applications have been in the use of dialkyl carbonates with zeolites (e.g. Y and X Faujasites) as catalysts for the selective alkylation of bidentate nucleophiles belonging to different classes such as aminophenols, carboxylic acids bearing both SH and OH additional functions, indolyl acids, mercaptophenols, mercaptobenzoic acids, and hydroxybenzoic acids. In all these cases, the combination of the carbonates and faujasites has proven excellent for the reaction chemoselectivity, allowing synthetic sequences which avoid burdensome derivatization (protection/deprotection) reactions. 2.Use of dense CO2 under liquid and supercritical conditions. Due to its intrinsic environmental compatibility, CO2 is the natural green alternative to traditional liquid solvents. In this field, the investigation has been directed towards different original research lines in which CO2 has been used as a solvent or as reagent/solvent for: a) phase transfer catalysed (PTC) reactions and biphasic water/CO2 systems; b) synthesis of different amine derivatives such as organic carbamates  and oxazolidinones; c) formation of C-C bonds via metathesis of terminal olefins and synthesis of nitroolefins through nitroaldol condensation; d) setup of Lab-plants for continuous-flow application of dense CO2 as a carrier. In over 10 years, an extended know-how has been acquired in the fine tuning of the experimental setup for loading, sampling and extraction of the products using in reactors at medium-high CO2 pressures (50-200 bar). At the same time, also the knowledge on the effect of the tuneable properties of scCO2 (density, viscosity, solvating power) on the rates and selectivity of the investigated processes, has been greatly improved. 3.Highly selective organic reactions under mild conditions through the use of ionic liquids as organocatalysts and/or mediators for multiphase systems. In this sector, original studies have been focused on: a) multiphase systems made by two immiscible solvents, usually an organic/aqueous mixture, and an ionic liquid adsorbed on a heterogeneous catalyst (supported Pd, Pt, Ni). These ensembles have shown good performance to set up novel chemical methodologies veered towards the degradation of organic pollutants (hydrodehalogenation reaction), for hydrogenation, hydrogenolysis, and hydroformilation, and for carbon-carbon bond forming reactions (Heck). Under the examined conditions, the ionic liquid as a liquid phase that coats the heterogeneous catalyst, not only often induces unexpected favourable results on both reaction rates and selectivity, but it allows an easier recovery and recycle of the metal catalyst. b) ionic liquids of new generation based on carbonate onium salts. These compounds are attractive for both their green synthetic method and for their extraordinary and unprecedented catalytic behavior for fundamental carbon-carbon bond forming reactions such as the Michael and Henry ones. 4. Upgrade of biomass derivatives. This research activity has been only recently started (2008) and it has been primarily focused on the conversion of glycerol derivatives (acetals and carbonates) in high-added value compounds (ethers and alkylated products) through green methods using safe catalysts (zeolites and solid inorganic bases) and ecosolvents (light dialkyl carbonates).

On the topics described above, Prof. Selva has been active as scientific referent/contact within several projects with both National and International Academic and Industrial Institutions. Among them: a) the project "Organic Syntheses with Zeolites: Activation of CO2 and of Organic Carbonates for Fine Chemicals" of the COST Chemistry Action D29 Sustainable/green Chemistry and Chemical Technology carried out with the University of Torino, AAchen, Poitiers, and Prague; b) the Integrated project (IP) "SOLVSAFE" funded by EU for the development of new green solvents, which involved Universities (Universidad Complutense de Madrid, IUCT de Barcelona, and the Consorzio Interuniversitario Nazionale "La Chimica per l'Ambiente") as well as several SMEs (small and medium enterprises) located in Austria, France, Italia, Rumania, Spain and Switzerland; c) 3 different PRIN (Research Projects of National Interest) projects on Green Chemistry topics for eco-sustainable organic syntheses. In particular, in the two PRIN project funded in 2006-2008 and 2008-2010, Prof. Selva was scientific director. These projects were carried out in collaboration with the University of Pavia, L'Aquila, Ferrara, Camerino, Parma, and Perugia, d) 7 projects for research/formation activities funded by ESF (European social fund) through the Regione Veneto. These projects were based on the development of synthetic methods and extractive protocols with low environmental impact, and they were (are) carried out along with an industrial local partner and the Coordinamento Interuniversitario Veneto per le Nanotecnologie (Civen).

Prof. Maurizio Selva is author of +130 scientific publications on international journals, 10 patents, and 15 book chapters. His research activity has also produced +100 communications at international and national scientific meetings. The h-index of Prof. Selva is 38 (April 2021: scopus).